The Herbal Cure – All Known as Lavender Oil

Lavender has been in use for over 2,000 years. It is said that the Egyptians used the oil first, as a fragrance and in mummification. The Arabians and Phoenicians also used lavender oil as perfume. The name for lavender in ancient Greece was “spikenard” and was used to treat everything imaginable.

During the times of the Romans, lavender was a highly sought after substance. The flowers themselves were worth more than a farmer could make in a month. Romans used the petals to scent their baths, and this is the reason lavender is named so; the Latin lavare mean “to wash.” This was not the only thing that Romans used lavender for though. They put it in their blends for smoking, as a perfume as the Egyptians did, used it as an insect repellent, and used it for flavoring food and drink.

In the Medieval times, lavender was used in homes to deodorize and disinfect. It was believed that lavender warded against illness, so it was grown in many gardens. When the Great Plague of London hit, lavender was being used everywhere as a means of fighting off the disease. People carried satchels, gloves makes used lavender oil to scent their leathers, and looters who ransacked the homes of victims of the Plague washed in a concoction containing lavender oil to cleanse away any remnants of the Plague they might have caught.

The Quakers used lavender as well, and this is who the use of lavender and lavender oil was introduced to the United States and Canada. They produced their own herbs, crafted medicines, and sold them to the neighbors outside of their sect. As the Quakers were a celibate sect, they more than likely never looked into the romantic and sensual effects of lavender oil. However, it is rumored that Cleopatra used lavender oil to beguile her men, such as Julius Caesar and Mark Antony.

There are three different ways that lavender oil, and any other essential oil, is produced. The oldest is by using steam distillation. The plants are put into a steam chamber, the heat breaks down the plant, and it is taken away to another chamber to cool. Here, the oil and water portions are separated, and the oil is extracted.

A somewhat newer way being used to produce lavender oil is by carbon dioxide extraction. The equipment used in this process is quite expensive, and therefore not being used everywhere, however there are benefits to producing the lavender oil this way. A high amount of lavender oil can be extracted, carbon dioxide extraction is cool than the steam method, and therefore is more gentle to the plants, and the aromas produces are extraordinary.

The last method of producing lavender oil is by absolutes. An absolute is an oil that is used as a solvent, and is used to extract oil from particularly delicate things, such as the petals of roses and jasmine. This method is mainly used for perfumes, not for therapeutic oil. 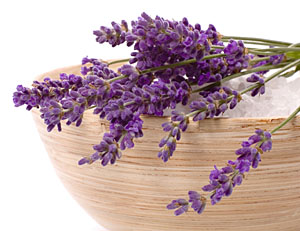 While there are over 39 different types of lavender, only four of them can be used to make lavender oil. French lavender, spike lavender, lavandin, and true lavender all have a unique use.

Lavandin oil is extracted from the lavandin plant, a cross breed of true lavender and spike lavender. It is often called Dutch lavender oil. It smells similar to menthol and is used for colds and coughs, and as a muscle relaxant. While it can be used in a pinch, it is not recommended to be used as a substitute for true lavender oil.

Finally, there is true lavender. It provides a myriad of aromatherapy uses, such as relief from migraines, anxiety, insomnia, and burns. The fragrance of true lavender oil is extremely floral, with sweet and spicy tones.

Lavender oil has many uses, most of them being medicinal. Lavender oil can cool burns and stings. It also stimulates blood flow to the area is it applied to, which can aid in healing. Rubbing lavender oil on the forehead or temples can ease a headache and even a migraine in the early stages. Used as a massage oil, lavender oil can relieve muscle pains, arthritis, and tension headaches stemming from the shoulders and neck. A few drops in an aroma diffuser can calm and diminish anxiety. Lavender oil is even said to help relieve insomnia.

Lavender oil has other uses though. Used as a hair rinse or a perfume, it can be used as an insect repellent. Lavender oil (or the petals) can be used in cooking, particularly French cuisine.

French dishes are the main use of lavender and lavender oil. Lavender oil is very functional in desserts, such as breads, jellies, scones, and cakes. It goes along quite well with chocolate. It can also be used in savory dishes, such as lamb.